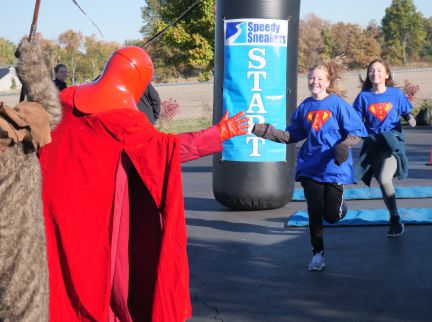 The Super Braxton 5k Run and Walk this year will include both an in-person and a virtual event.

A virtual race means you run/walk by yourself or a small group of friends/family anyplace you chose and anytime you want.  When you have completed your race, you submit your times to a leaderboard.  The leaderboard will be updated as people begin to submit their times.

How to submit your times for results

Cost:  $30/participant, which includes T-Shirt.
Early Bird Discount: $5 off per person if registered by October 15
Former and current Pediatric Cancer patients and their immediate families are free, but must still register.

Braxton Michael Long was diagnosed in October of 2014 with Glioblastoma multiforme, GBM, stage 4 brain cancer. He woke up from sleeping with a debilitating headache, which was quickly followed by complete loss of the use of his left side and being able to talk. He was rushed by squad to Nationwide Children’s hospital where they performed a series of tests. He underwent brain surgery the next morning to remove a tumor that had exploded in his brain. This surgery was quickly followed by another to place a shunt after it was determined his brain was under severe pressure. Because the tumor was located right between the two hemispheres of his brain, he had to undergo years of physical and occupational therapy to regain day to day function. He then underwent intense chemotherapy for 9 months that required stem cell transplants to even survive because of the huge doses he received. He was declared cancer free in July of 2016, but 6 months later the cancer returned.

He then went through 3 months of radiation and chemotherapy every 2 weeks until December 30, 2016 when his MRI revealed the cancer had infiltrated his entire brain, brain stem, and spine. He was then put on hospice and told he had 4-6 weeks left to live. However, Braxton survived 7 months with a smile on his face until the last week! He was an amazing kid who never lets anything get him down. He was known at the hospital for never complaining and always having a smile on his face. He was very outgoing and optimistic. He loved playing soccer, golf and basketball and eating anything with sugar. LOL! He is a twin. His twin sister’s name is Emberly. They were extremely close and so cute to watch interact with each other. They also have an older sister, who is only 17 months older named Gracie. Her and Braxton fought a lot because their personalities are so much the same. Two leaders never works out. Ha!

However, if anyone tries to mess with Braxton besides her, she will be the first one to come to his rescue. Braxton passed away on July 24, 2017 at the age of 8 after fighting for 3 years. Braxton presented his idea of collecting Legos for his friends in the hospital while he himself was in the middle of his fight. The months before Christmas 2016 he decided he wanted to figure out a way to make his friends smile. What better way than his favorite toy of Legos. Braxton always had Lego sets with him at the hospital whether we were there for a day of chemo infusions or a month inpatient stay. They were something fun to do from a hospital bed that other than watching tv. We give the smaller sets to kids getting chemo infusions that get to go home after several hours and bigger sets to kids who have longer stays ahead of them.

In October 2015 at the Regional Lions Leadership Institute, 14 leaders from all over Ohio were tasked with the responsibility of creating a Centennial Legacy Project, to be held in 2017 as part of the 100 years of service celebration.

Out of the scores of ideas that were generated, the team chose pediatric cancer research as the most important issue. A series of walks across the state of Ohio in each of the seven districts, to be held in or as close to September (National Pediatric Cancer Awareness Month) as possible, was decided as the best manner in which to raise both money and awareness. The committee voted to allocate all profits and proceeds from the events to Children’s Hospitals oncology research departments supported by the Ohio Children’s Hospitals Association (OCHA).In May 2016, the committee presented the project to the Ohio Council of Governors, who voted unanimously to adopt the STEPS program as the 2017 Centennial Legacy Project.

In early 2017, Lions Clubs International (LCI) announced, independently and without knowledge of this project, that pediatric cancer awareness and research had become a priority issue for Lions across the world. In the fall of 2017, 7 events were held statewide in the first annual STEPS walks in around the month of September. Ohio Lions, Inc. is a 100% volunteer organization.

The event is finished.